Traditional Christian Hymns
"A Mighty Fortress Is Our God"


“The Lord is my rock, and my fortress, and my deliverer; my God, my strength, in whom I will trust; my buckler, and the horn of my salvation, and my high lower,” Psalm 18:2

Martin Luther was born on November 10, 1483 in Eisleben, Saxony, Germany. He was educated at the University of Erfurt, later becoming an Augustinian monk, teaching philosophy and theology at the University of Wittenberg. On October 31, 1517, sometimes called the "4th of July of Protestantism,'' Martin Luther nailed his ninety-five theses to the door of the Cathedral of Wittenberg, Germany. These theses condemned various practices and teachings of the Roman church. After several years of stormy disputes with the Pope and other church leaders, Martin Luther was finally excommunicated from the fellowship of the Roman Catholic church in 1520.

One of the important benefits of the Reformation Movement was the rediscovery of congregational singing. Luther had strong convictions about the use and power of sacred music. He expressed his convictions in this way. "If any man despises music, as all fanatics do, for him I have no liking; for music is a gift and grace of God, not an invention of men. Thus it drives out the devil and makes people cheerful. Then one forgets all wrath, impurity and other devices." Again, "The Devil, the originator of sorrowful anxieties and restless troubles, flees before the sound of music almost as much as before the Word of God." In another place, "I wish to compose sacred hymns so that the Word of God may dwell among the people also by means of songs." Finally, Luther wrote, "I would allow no man to preach or teach God's people without a proper knowledge of the use and power of sacred song."

The single most powerful hymn of the Protestant Reformation Movement was Luther's "A Mighty Fortress Is Our God," based on Psalm 46. This hymn became the battle cry of the people, a great source of strength and inspiration even for those who were martyred for their convictions. This hymn has been translated into practically every known language and is regarded as one of the noblest and most classic examples of Christian hymnody. It is said there are no less than sixty translations of this text in English alone. In England the version by Thomas Carlyle is in general use, while in this country the translation by Frederick H. Hedge, a professor at Harvard University, is used most frequently. This translation was not made until 1852 and first appeared in a book entitled Gems of German Verse by W. H. Fumess, published in 1853.

The first line of this national hymn of Protestant Germany is fittingly inscribed on the tomb of the great reformer at Wittenberg, and may still be read with appreciation by travelers to that historic spot. 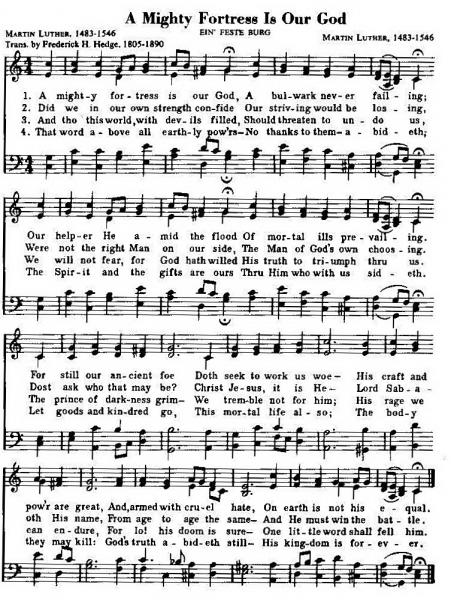